You’re most likely to overpay for gas in these U.S. cities

Everyone thinks they overpay at the pump. But it turns out that drivers in California are the hardest hit.

Hanford, Calif., tops the list of cities that overpay the most for gas, according to GasBuddy’s “Pump Price Spread Report” released Thursday. That city has a “whopping” $1.26-a-gallon average difference between the highest- and lowest-priced gas stations within GasBuddy-defined metro areas.

“The spread is more significant in certain areas due to a number of factors like competition and geographic location,” Patrick DeHaan, senior petroleum analyst at retail fuel-pricing information and data provider GasBuddy, said in a statement.

The average retail price for a gallon of gasoline stood at $2.319 Thursday, according to data from GasBuddy. That’s down about 4.7% from last week’s average, but up 3.2% from last month’s average. Futures prices for gasolineRBN6, -4.65%  settled at $1.604 a gallon Thursday, up 1% for the session and trading roughly 26% higher year to date.

The cities that rank the highest tend to be “sprawling with a major connecting highway running through them,” said DeHaan.

Here are the rankings for the top 20 of the 456 cities in GasBuddy’s database: 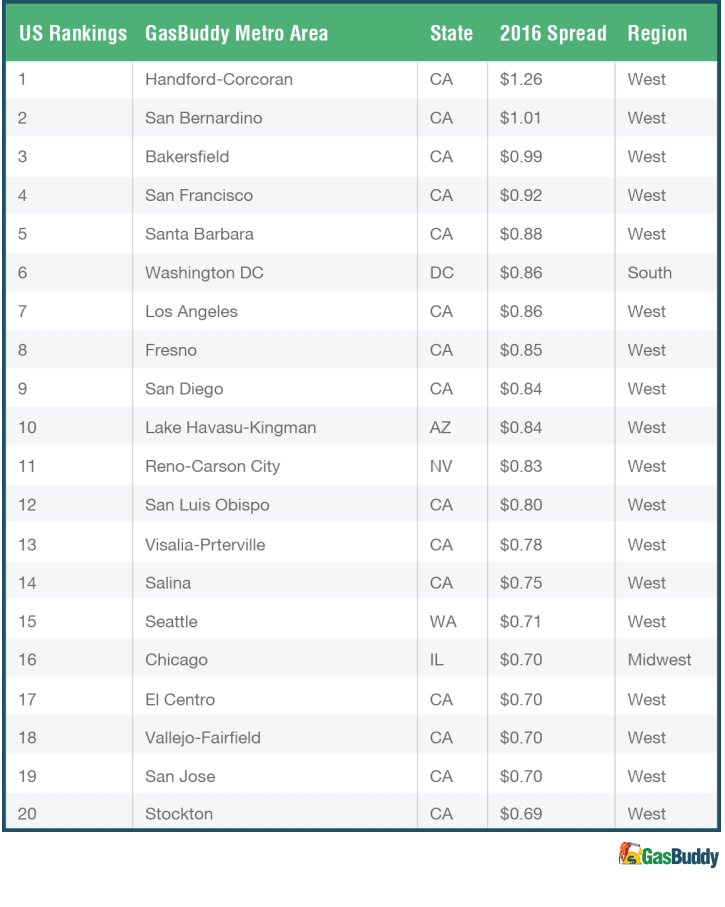 “The good news for drivers in these areas is that there are opportunities to save money if you know where to look and choose to shop wisely,” DeHaan said.