The Cycle, Not Automation, is Keeping Oil and Gas Hiring Down

The Cycle, Not Automation, Is Keeping Oil & Gas Hiring Down

Despite recent increases in oil and gas activity, some doubt that employment in the sector will ever reach the highs of 2014 again. Producers have been cutting costs and increasing productivity, partly thanks to an increased deployment of technology. Does this technological progress mean that some of the jobs lost in the sector over the last two years will not come back, even if high oil prices do?

Fears that technological progress might eliminate jobs are nothing new. While technology increases productivity and makes society wealthier, these gains aren’t always equally shared. For some, it can be difficult to switch careers, and new jobs might not pay as well as the old ones.

But the story of technological progress in the U.S. oil and gas industry is a hopeful one. Technology has had a record of creating jobs, not destroying them. Today, lackluster hiring is due to cyclical pressures, not the replacement of people with machines.

In the mid-2000s, a singular innovation— combining hydraulic fracturing and horizontal drilling—dramatically lowered the cost of extracting oil and gas from shale. This cost-reduction kicked off an energy revolution: the North American shale boom. For the next 10 years, further improvements in oil and gas extraction technology spurred unprecedented employment growth in both E&P firms and oilfield services (Figure 1). 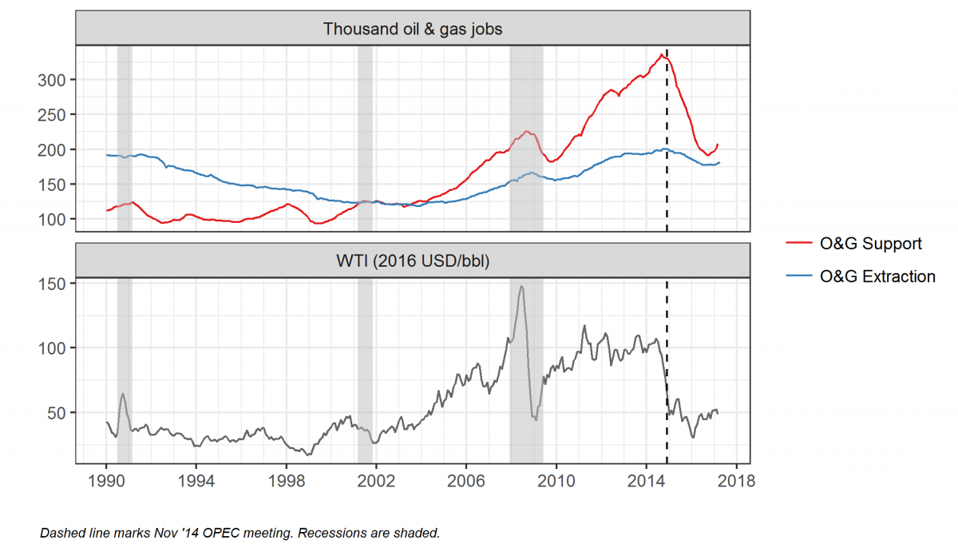 The timing of the shale boom could not have been better. While most of the country suffered high unemployment during the Great Recession and its aftermath, the oil patch was hiring. As our research at the Center for Energy Studies has shown, this helped create jobs at a time when the country needed them most.

However, just like the oil booms before, this one also came to an abrupt end. Oil prices began falling quickly in mid-2014. On November 27 of that year, OPEC decided to maintain oil production levels and allow prices to stay low. The incredible expansion of the American oil and gas industry stopped. As Figure 1 shows, employment fell precipitously in what the Bureau of Labor Statistics (BLS) calls the oil and gas extraction sector (E&P firms) and especially oil and gas support activities (oilfield services firms). 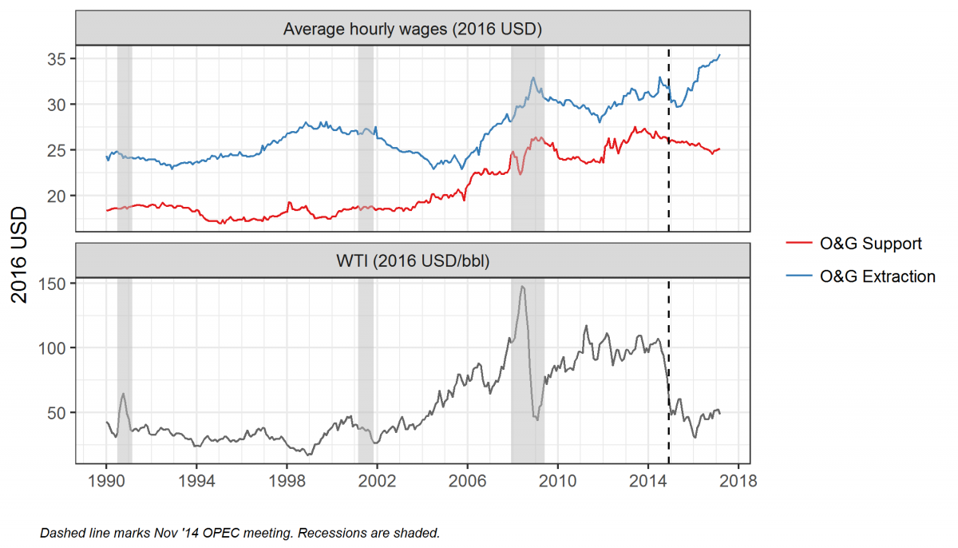 The opposite trajectories of extraction and support wages, while at first glance surprising, are consistent with classical economic theory. Theory sees wages as a measure of labor productivity: the marginal worker is paid the value he or she brings to the firm. Higher wages, therefore, are associated with higher productivity and vice versa.

Classical theory would suggest that as oil prices fell, firms would cut low-productivity workers and keep high-productivity ones. E&P firms, captured in the extraction sector, appear to be retaining their highest-value workers who are more experienced and more expensive. 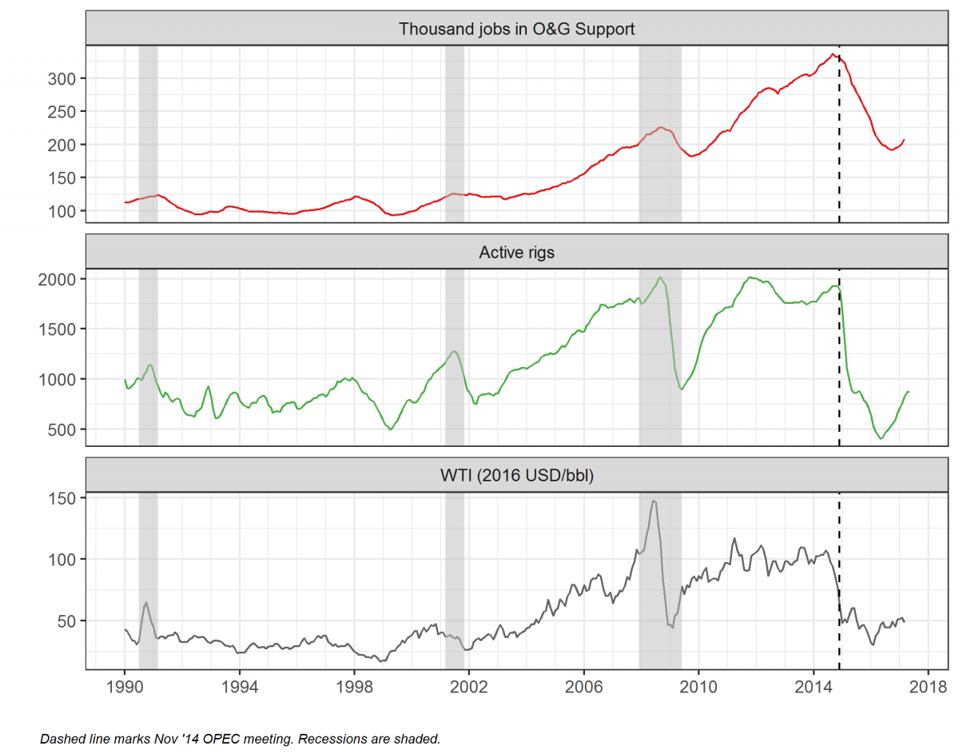 In contrast, wages in oil and gas support activities began a steady decline beginning in mid-2013, suggesting that on average, oilfield services produced less output per worker. Though employment fell significantly in oil and gas support activities starting in 2015, the drop was nowhere near as fast or far as the drop in the number of rigs actively drilling for oil and gas (Figure 3). A higher number of workers in support services per active rig meant that on average, each hour of work in the sector was associated with fewer new wells than before. 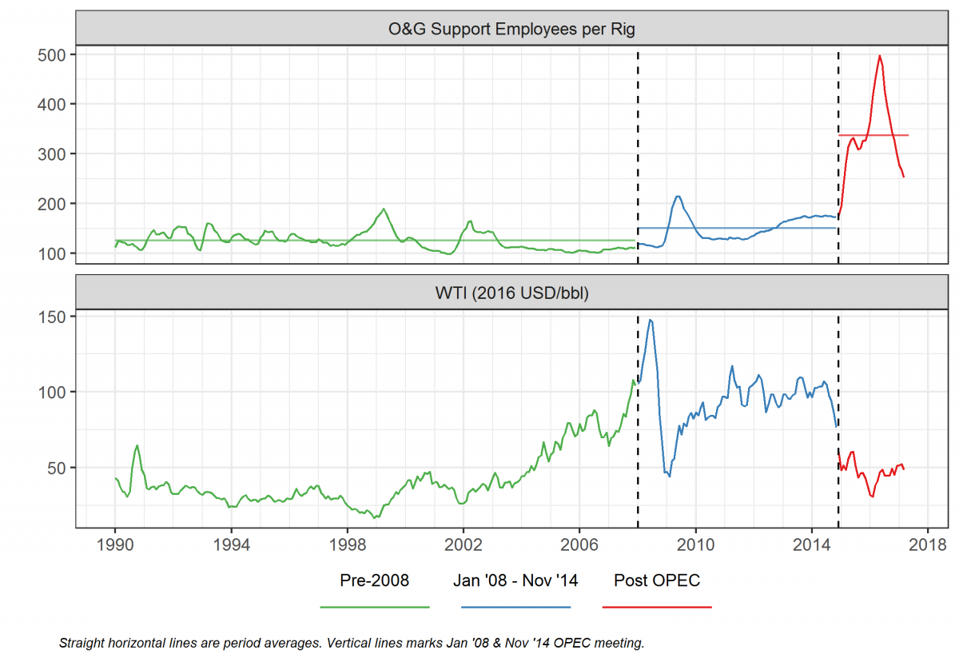 Figure 4 takes a closer look at the ratio of employees in oil and gas support activities to the number of active rigs. The ratio spiked immediately following the 2014 OPEC meeting, marked by the second vertical dashed line. It is far easier and less costly to idle rigs than fire people, so the adjustment of employment in oil and gas support activities is slower than adjustment in rig-counts. This is especially true in times of uncertainty. During a downturn, if prices and investment are projected to come back up, a larger labor force gives firms the flexibility to ramp operations back up. In fact, during the price swings of 2008—2009, rig-counts also dropped quickly, while layoffs were slower to materialize. This made the employee-rig ratio spike and allowed the sector to recover when prices rose and drilling activity picked back up.

It seems likely that the ratio of employees to rigs, currently in the red region, will keep moving toward a “normal” level closer to a historical average. The straight, horizontal lines in Figure 4 depict the average ratio of employees to rigs over the periods 1990—2007 (green), 2008—November 2014 (blue), and December 2015—March 2017 (red). There is reason to think that employees per rig might end up closer to the blue shale boom period, despite technological progress. Well completions, performed by oilfield services firms, are more complex, intense, and expensive than conventional drilling that dominated pre-shale investment. This requires more people. That’s good news for hiring. 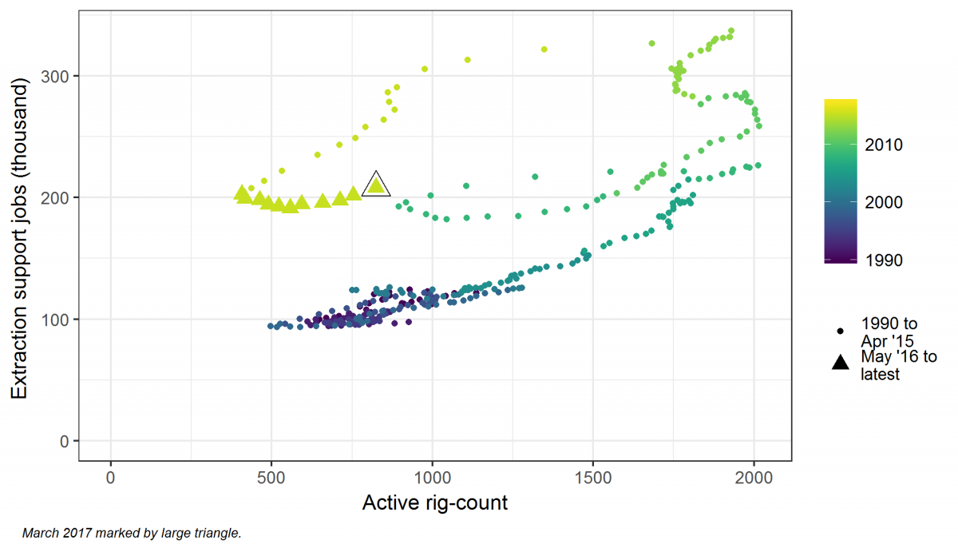 Figure 5 shows more detail on the relationship between rig-counts, (the horizontal axis) and extraction support jobs (the vertical axis) from 1990—March 2017. The larger yellow triangles mark the most recent data from May 2016 through March 2017. The rightward movement of these triangles indicates rising drilling activity. This means that the falling ratio of employees to rigs is due to increased drilling, not layoffs, which is a positive sign for the industry. Having more than a skeleton crew on hand is enabling this increase.

While the number of employees per rig may drift toward its shale-boom average, this does not guarantee that the total number of employees will return to its 2014 high in the medium term. Figure 5 shows that this would involve creating around 125 thousand new jobs in oil and gas support services alone—a 60% increase from present levels. Barring a large runup in oil prices that spurs dramatic increases in the number of wells we drill each month, we are unlikely to need as many total oil and gas workers as we did in mid-2014. Furthermore, while more intense well completions increase the number of man-hours needed per well, ongoing improvements in production per well mean we will most certainly need fewer hours of labor per barrel of oil production. That could one day dampen future employment gains, but such changes will be more gradual than those induced by the oil-price rollercoaster.

The very recent history of employment in oil and gas is a story about cyclical pressures driven by oil prices. Hyper-efficient machines did not push out less productive workers. The precipitous drop in oil prices drove down employment. Adjustment costs and the need to be ready for a recovery in drilling activity initially kept oilfield services from firing employees as fast as they idled rigs in 2015. The current slow recovery in job-growth is simply the flip-side of this. Until the ratio of workers to rigs falls a bit more, it’s unlikely that we’ll see major employment gains in the sector.

At a longer time-horizon, innovation has done much more to increase employment in oil and gas than decrease it. It was technology that caused each hour of work to produce more hydrocarbons than before. This ushered in the shale boom and drove large increases in employment and wages for the oil & gas sector. The industry learned how to extract oil and gas more profitably using longer wells, more water, and more sand. This drove increasing investment and employment as drilling rates accelerated faster than technology diminished the labor requirement per barrel of oil.

Turning to today, employment in oil and gas support activities has begun to tick back up, which is good news for a hard-hit workforce. Currently, the biggest obstacle to employment gains in the short-to-medium term is not job-killing advances in automation, but a more mundane reality that cyclical resource prices are still low, and firms don’t need to hire many people just yet.

In the long-term, future technological advancements will undoubtedly reduce costs for a given well, and we will see a race between technology, geology, and labor. Gradually increasing cost-efficiencies will reduce labor-requirements per well. However, depletion of shale sweet-spots will force us to drill in places with higher labor-requirements. And a still-undiscovered, revolutionary shale technology might just fuel another boom in investment and hiring.

Mark Agerton is a graduate fellow with the Baker Institute’s Center for Energy Studies at Rice University. Visit his website: http://www.bakerinstitute.org/experts/mark-agerton/ or follow on Twitter @magerton.