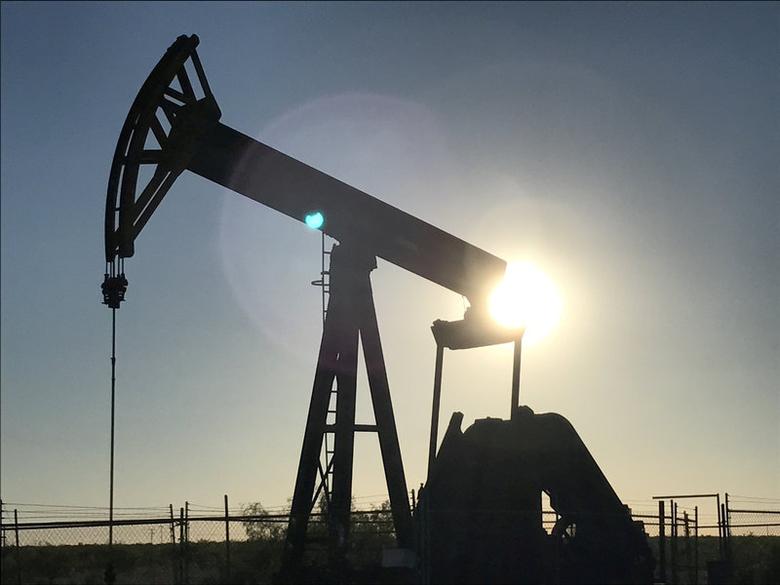 FILE PHOTO: An oil pump is seen operating in the Permian Basin near Midland, Texas, U.S. on May 3, 2017. Picture taken May 3, 2017. REUTERS/Ernest Scheyder/File Photo
By Gary McWilliams | HOUSTON

Strong demand for shale oil-and-gas infrastructure is giving rise to an important new financing vehicle for pipeline, processing and storage ventures that are needed to get more shale fuels to market.

So-called special purpose acquisition companies, or SPACs, seek to fill the gap left by the declining use of master limited partnerships, which historically have helped finance such capital-intensive midstream projects.

U.S. crude output is expected to rise 4.5 percent this year and another 7.5 percent in 2018, to about 10 million barrels per day, eclipsing a 47-year-old record. Without hefty infrastructure investments – about $30 billion a year through 2020, according to Tortoise Capital Advisors – that increased flow could face a bottleneck.

As the 2015 oil-price decline lowered U.S. output, energy MLPs failed to deliver promised growth and returns, shutting off one key source of investment.

Between 2011 and 2014, 60 energy MLPs went public, raising about $23 billion in total proceeds. Since then, only a dozen have done so, according to the MLP Association, a Washington-based trade group. Those offerings raised about $6 billion.

SPACs offer a way to do large deals for existing companies whose private-equity owners want to sell or who need cash for expansion. SPACs raise money from institutional and retail investors – who invest without knowing what will be acquired – then go shopping for deals.

Unlike MLPs, SPACs pitch investors on the credentials of their veteran management teams rather than the companies in their portfolios. Investors in SPACs gamble that the executives can find a deal at a suitable price.

Rising shale output and falling investments in MLPs have whetted appetites for new financing alternatives to fuel the growth of oil firms.

“We think the market is ripe,” said Jim Baker, a partner at Kayne Anderson Capital, which created the first energy-infrastructure SPAC in April.

Its SPAC raised $377 million through an initial public offering to hunt for large infrastructure businesses in U.S. shale basins.

“There are a lot of private-equity-backed midstream companies that ultimately need to exit and find a long-term home,” said Robert Purgason, chief executive of Kayne Anderson Acquisition Corp, as the SPAC is called.

Purgason is a former executive with pipeline operators Crosstex Energy and Williams Cos, and he led Chesapeake Midstream Partners through an IPO. At Williams, he ran a business that provided fuels transportation for producers including Anadarko Petroleum, Royal Dutch Shell and Total.

Kayne Anderson Acquisition expects to build its war chest to buy midstream companies to between $1.5 billion and $2 billion through a combination of borrowing and convincing private equity owners to hold stock in any deal.

It hopes to have at least one deal in hand before year-end, Purgason said.

Earlier SPACs have focused on buying shale producers instead of storage and transportation firms.

That deal’s success – investors in the IPO have received a 47 percent return in the last year – spawned several copycats this year.

SPACs have an advantage in the current market because of their potential to compete for larger deals than private equity buyers and their ability to use cash and equity.

“There are a lot of assets for sale on the midstream side,” said Brian Kessens, a managing director at Tortoise Capital, which specializes in energy investments and MLP-backed mutual funds. “For the larger assets, there aren’t a lot of larger buyers.”

LOSS OF FAITH IN MLPs

Over time, MLPs are designed to pay the general partner who sets up a business a larger share of its earnings via distributions, similar to dividends, which in turn shrinks the share of future payouts to retail investors.

The increasing amount paid to the general partner makes it more difficult to raise money from investors for later-stage projects. That’s especially true if the firm’s overall earnings do not grow rapidly after the influx of investment.

“It gets burdensome five or 10 years out for a growing MLP,” said Greg Reid, president of Salient MLP Complex, a money manager with more than $5 billion in MLP assets.

The troubles that some MLPs have faced in growing their businesses has led to a consolidation.

Canadian pipeline firm Enbridge Inc, for instance, this year acquired its natural gas MLP, Midcoast Energy Partners LP, after that business struggled to grow in its U.S. Gulf Coast region and its share price tumbled to $8 from $25 in 2014.

“The liquidity available for incremental investment by MLPs just is not there to the same degree as before,” he said.

The struggles of MLPs have opened the door for SPACs to finance pipelines, processing plants to separate liquids and storage facilities to hold oil and refined products.

A SPAC offers owners – including private equity firms that jumpstart many infrastructure startups – faster liquidity because it has publicly traded shares, said Salient MLP’s Reid. An investor can sell shares at any time, unlike those in a private equity fund, who face a lockup period or a gamble on the timing of a future IPO.

If Kayne Anderson’s SPAC does well, Reid said, his firm would consider putting together a similar company for energy infrastructure deals.

A SPAC that has money to spend and is already public has an advantage in the current market for infrastructure deals.

“The IPO window is open,” said Reid, “but it’s not as easy as it was two or three years ago.”