Oil Prices on a Slippery Slope

Oil Prices On A Slippery Slope 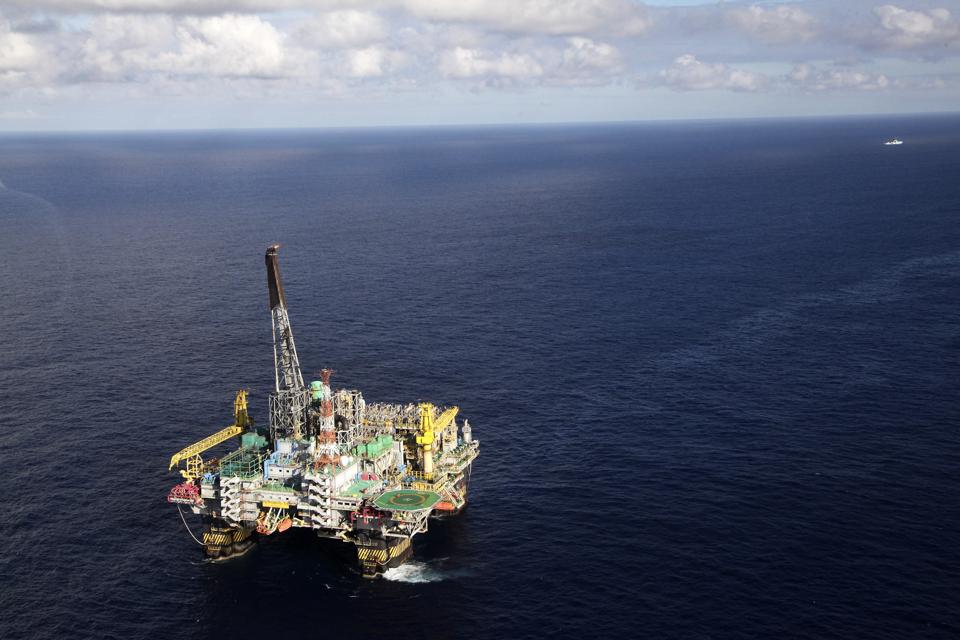 As I’ve articulated in the last several Forbes.com articles, I believe that oil prices are going to drift much lower over the coming year. I keep harping on it because I am fighting a pervasive bullish bias in the financial media and in street expectations. It’s important as an investor to know what not to own. And as a hedge fund manger, I’m making money on volatile oil prices by shorting three highly levered oil service companies: Ren Energy (REN), Andarko Petrolium (APC) and Continental Resources (CAR) as well as I’m long two levered (short) ETFs: SCO, tied to the price of oil directly, and DUG which reflects a short basket of energy companies.

The consensus bullish case hinges on expectations that OPEC (for the first time ever) will cut production to keep the price high. Plus, we’re entering the seasonally strong driving season in the U.S. Oh, and gasoline inventories are slightly below all-time-highs and appear to be falling.

As for OPEC, none of the 6 main member nations are in a position to cut production for long. Why? They are broke. There’s no economic stability because their economies are one dimensional. Meanwhile, they lack social stability and reside in the middle of a big war zone. A common fallacy among traditional analysts is that despite their desperate need for cash, OPEC nations will willingly agree to diminish their cash flows.

Everyone knows U.S. shale production is thriving. What’s not on the average analyst’s radar is the potential increase in conventional U.S. production. Under Trump, the regulatory jihad against the energy sector is over. Trump’s choices for Secretary of Energy, the Interior and as head of the EPA, will ensure more conventional energy production.

As an example, on March 6th, the Department of the Interior issued a press release stating that new Secretary Ryan Zinke has called for an auction of 73m acres of Gulf of Mexico oil fields. Upon the announcement, oil prices promptly fell from $53 a barrel to $47. The U.S. bombing of Syria reversed the decline sending oil prices right back to $53. Now I’m short again and here’s why.

Estimates for U.S. shut in capacity (still in the ground) keep rising while the cost of drilling in shale keeps falling. Meanwhile liberalizing energy policies across South America will lead to the production of substantial new supplies. And cash strapped OPEC countries are being forced to borrow against future oil production, taking money now in exchange for revenues in the future. This pre-export financing is risky because when oil prices continue to fall, as I believe they will, borrowers will be forced to pump more to make payments, further increasing supply and driving down prices. Under this scenario, OPEC will not cut production. They will not be in charge of the price anymore. And Saudi Arabia will struggle in their attempt to diversify their economy away from oil. They have no cultural or economic infrastructure to allow that.

Now that we’ve seen the first of what I expect will be several announcements from the Trump administration, analysts will begin focusing on the huge amount of U.S. reserves lying fallow on land and in shallow water in U.S. territory. Once they start adding them to their future expectations for production, they’ll find that these are low cost reserves. Don’t let anyone tell you they aren’t recoverable at this price. 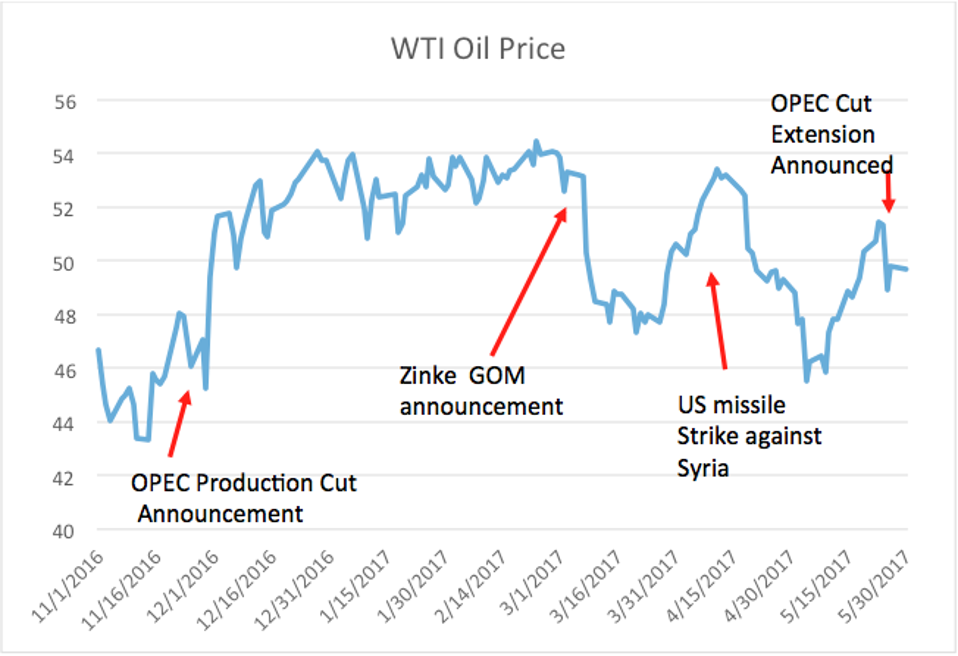 Drilling is regulated by the Bureau of Land Management (BLM) and the Bureau of Ocean Energy Management (BOEM), both under the auspices of the department of the interior. Both have new leadership and the chain of command is energized to expedite exploration. The following maps are from the BOEM site and show where companies have applied for permits to deploy 2D and 3D seismic technology to analyze the shallow water reserves on the Atlantic Ocean’s Outer Continental Shelf (OCS). 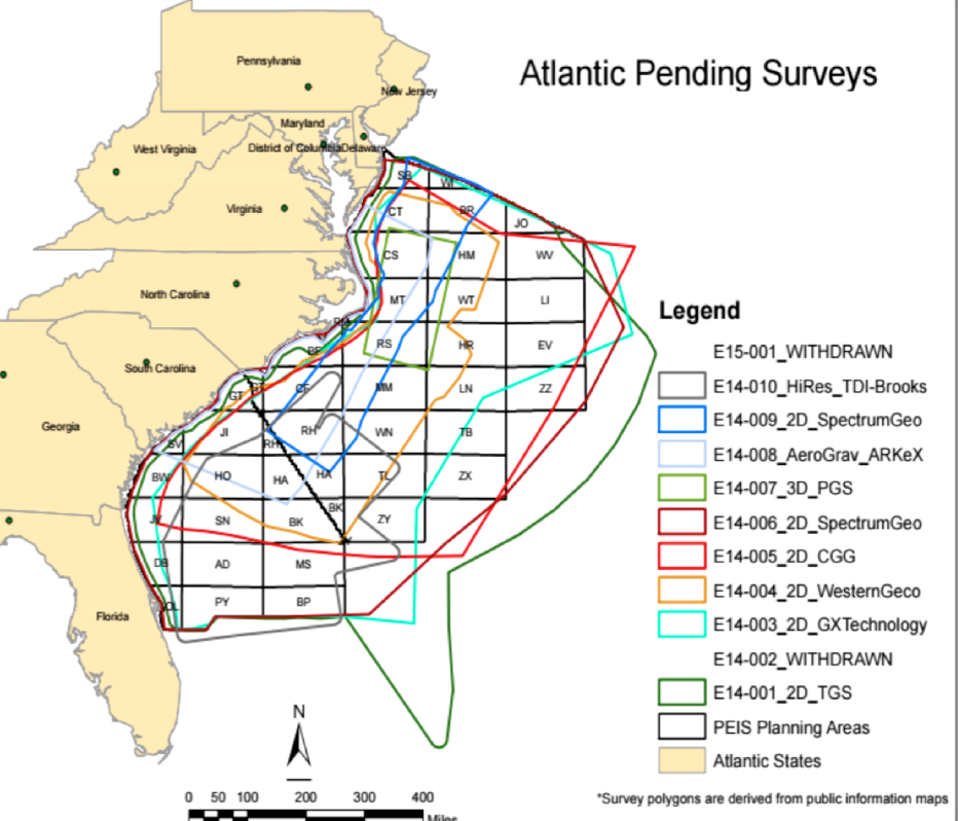 The chart below shows how restrictive the government has been in regard to the issuance of oil leases on federally controlled territory. Note the precipitous decline (red line) in the number of leases granted since 2005, falling from almost 12,000 leases granted to just over 500 in 2016. Obviously, other Presidents presided over this decline since it began in the mid 80s. One of the great ironies of George W. Bush’s tenure was his enactment of the wildly distorting ethanol mandate to “wean ourselves of our dependence on foreign oil” while his policies simultaneously restricted oil production. He maintained Clinton’s State Department moratorium against exploring on the OCS until oil prices skyrocketed to $144 per barrel in the summer of 2008. That’s when he buckled…announcing the end of the state department moratorium. This marked the very top for oil prices that summer and kicked off a huge decline.

A reversal of these restrictive policies could bring abundant supplies of oil back on the market. The Arctic National Wildlife Refuge (ANWR) holds an estimated 13 billion barrels (on land). The Beaufort/Chukchi Seas off of Alaska’s coast hold an estimated 26b barrels. The Atlantic coast OCS holds an estimated 5b barrels (and that’s a 40 year old estimate).

Secretary Zinke on March 6th, announced that previously off limits Florida Gulf coast would open for drilling. Take a look at the map showing drilling activity in the Gulf of Mexico below.

Notice that in the Eastern GOM, there are no oil rigs while we’ve produced 35b barrels from the Western GOM. Soon that empty space might be full of oil rigs.
U.S. Rig Count Continues to Increase

Weekly rig counts have steadfastly increased since bottoming out in June of 2016. This week’s rig count is 908. Up 7 rigs from last week (1%) and up 504 rigs from this time last year (54.5%). Rig count is not necessarily as good a proxy for production as it used to be due to the increased efficiency of rigs, more oil than before is pumped from a single rig.

Then there’s South America. Mexico’s privatization of Pemex reserves and assets will lead to a reversal of that country’s dramatic production declines. Guyana just announced a huge new discovery that the major oil companies are feasting on. And Argentina’s Vaca Muerta play is absolutely huge at an estimated 16b barrels in shale formations. As a “flow commodity” it matters that these reserves are in close proximity to the world’s largest consumer of crude oil – the U.S.

Following unsuccessful auctions in 2015, Mexico found bidders for deep-water blocks in their portion of the Gulf. State controlled monopoly Pemex is undergoing privatization, a lucrative step toward oil production and large scale investment in Mexico. In December, Mexico and Pemex auctioned off 8 blocks (in the Salina and Perdido Basin’s including the Trion Oil Field) in the Gulf of Mexico for development to the largest oil companies in the world. Development of these blocks could generate between 32 and 40 billion dollars of investment in development of the blocks. Estimated at 8.4b barrels of oil, huge new supplies await, knocking at our back door.

Argentina’s Vaca Muerta shale play holds an estimated 16 billion barrels of untapped oil reserves. The country garnered $5 billion in investment from companies like Chevron, Exxon Mobil, Shell, Total, and BP this year, with billions more pledged in the future. Recent domestic discoveries of frac-sand, vital to horizontal drilling, drove Argentinian costs of production down 10%. Frac-sand  is rare, and costs an arm and a leg to import. Previously, Argentina imported sand from the USA, China, and Brazil. Transportation costs were through the roof, making production nearly unprofitable, but those costs have been slashed thanks to the proximity of the new frac-sand. Argentinian output will increase in the near future with lower production costs. President Macri’s deregulation of Argentina’s economy will mean increased oil exports and exports in general. This year, wheat production in Argentina is up almost 33%. Guyana has an estimated 4 billion barrels in the deep waters off their coast. Exxon Mobil and Hess have already committed to Development of those waters (Hess allocated $475 million of its $2.25 billion exploration budget to the waters of Guyana’s coast). Even early yesterday, Hurricane Energy announced it discovered the largest undeveloped reservoir of oil off the coast of Scotland.

In summary, I think another announcement allowing further U.S. domestic oil exploration is coming soon. Such an announcement will pressure oil prices further. Deregulation of federal land will open up millions of acres and billions of barrels of oil to the market. Meanwhile billions of barrels of oil are being developed in Latin America. Use history as your guide, OPEC will out-produce their production quotas. The chart below shows OPEC’s propensity to overshoot quotas during production cuts.

Morgan Stanley predicts that OPEC could easily overshoot their target by 500,000 BPD. Between 2000 and 2008 OPEC out-produced their quota by 883,000 BPD. According to Goldman Sachs, in 17 production cuts since 1982, OPEC member have reduced production by only and average 60% of their commitments. They cheated then and they will cheat now. Oil supply is on the rise and prices will fall. Starting with an announcement from President Trump.

This Article was cowritten by Richard Clements, an analyst at N3L Capital and a disciple of  supply side economics.