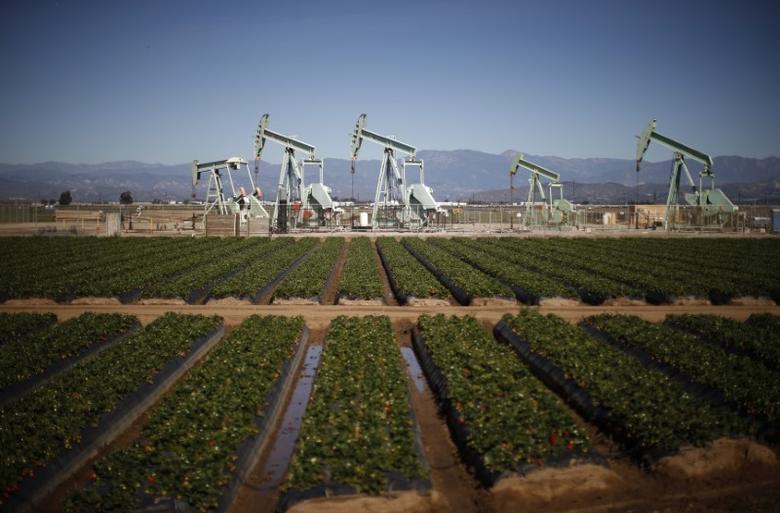 Oil pump jacks are seen next to a strawberry field in Oxnard, California February 24, 2015. REUTERS/Lucy Nicholson
By Ahmad Ghaddar | LONDON

Oil prices slid on Wednesday, extending falls from the previous session, as a big increase in U.S. crude inventories and a slump in Chinese demand implied too much global supply despite OPEC-led efforts to cut output.

International Brent crude futures LCOc1 were trading at $54.69 per barrel at 1501 GMT, down 36 cents from their previous close.

The declines came on the back of unexpectedly big increases in U.S. fuel inventories, as reported by the American Petroleum Institute (API) on Tuesday. [API/S]

“If the official data from the U.S. Department of Energy were to show a similar inventory build … U.S. crude oil stocks would be catapulted to almost a record level,” Commerzbank said in a note.

Gasoline stocks rose by 2.9 million barrels, compared with expectations for a 1.1-million-barrel gain.

Goldman Sachs analysts said that the data pointed to “U.S. gasoline demand falling sharply by 460,000 barrels per day (bpd) year on year in January, with such declines only previously (seen) during recessions.”

Growing U.S. supplies undermine a deal led by the Organization of the Petroleum Exporting Countries (OPEC) to curb output and support prices.

But OPEC, for the time being at least, is not greatly concerned with rising U.S. output.

“The market is gradually accommodating for shale oil as well as shale gas – the demand is healthy. With that continuous demand increase I think all available oils are going to be accommodated,” Qatari Energy Minister Mohammed al-Sada told Reuters on Wednesday.

Prices also came under pressure from signs of slowing demand from the world’s biggest energy consumer.

China’s 2016 oil demand grew at its slowest pace in at least three years, Reuters calculations based on official data showed.

China’s implied oil demand growth eased to 2.5 percent in 2016, down from 3.1 percent in 2015 and 3.8 percent in 2014, led by a sharp drop in diesel consumption and as gasoline usage eased from double-digit growth.