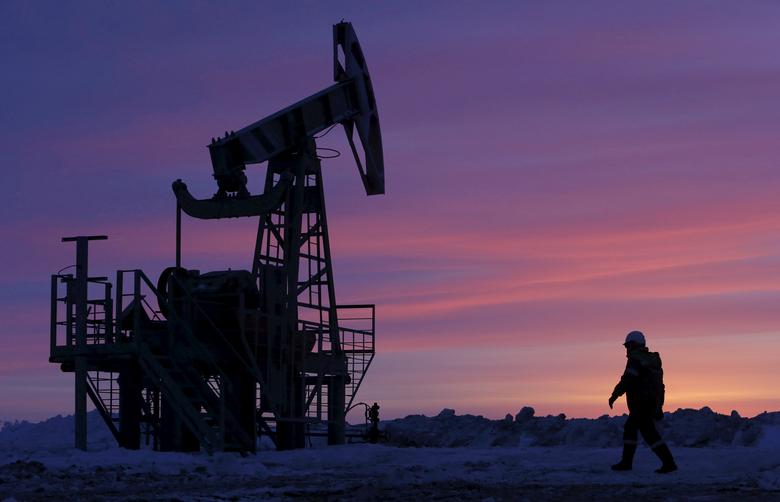 A worker walks past a pump jack on an oil field owned by Bashneft in Bashkortostan, Russia, January 28, 2015. REUTERS/Sergei Karpukhin/File Photo
By Karolin Schaps | LONDON

Oil prices rose on Friday, recouping some of the previous session’s losses, as a weaker dollar encouraged buying but investors remained cautious after Russian production figures showed weak compliance with a global deal to cut output.

Global benchmark Brent LCOc1 was up 36 cents at $55.44 a barrel at 1456 GMT, recovering some of Thursday’s losses that amounted to more than 2 percent.

“The market is range bound, therefore there is nothing surprising in seeing fresh buying after a big sell-off and of course the slightly weaker dollar is also helping oil recover,” said Tamas Varga, senior analyst at London brokerage PVM Oil Associates.

The dollar .DXY slipped from a seven-week high on Friday ahead of a key speech by Federal Reserve chief Janet Yellen.[USD/]

“Because prices have failed once again to rise above their trading corridors, there is a growing risk of speculative selling,” said analysts at Commerzbank, suggesting further downside potential.

Oil’s gains were capped after concerns remained over non-OPEC compliance with a global deal to rein in oversupply.

Russia’s February oil output was unchanged from January at 11.11 million barrels per day (bpd), energy ministry data showed, with its cuts from October 2016 levels remaining at 100,000 bpd or a third of what was pledged by Moscow under its agreement with the Organization of the Petroleum Exporting Countries.

In a bid to maintain demand for its oil, world top exporter Saudi Arabia has cut the price for its April light crude deliveries to Asia, trade sources told Reuters.