Oil bounces back from two-month lows on weaker dollar 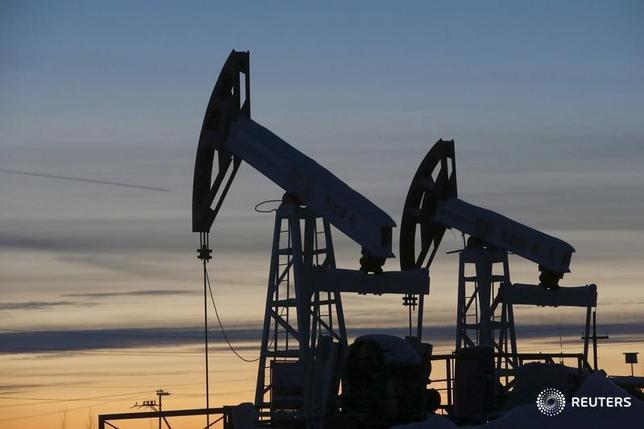 Pump jacks are seen at the Lukoil-owned Imilorskoye oil field, as the sun sets, outside the west Siberian city of Kogalym, Russia, in this January 25, 2016 file photo.

Crude futures bounced back from two-month lows on Tuesday, helped by a weaker dollar, but an oil stocks overhang and a drop in bullish bets by investors weighed on prices.

Saudi Energy Minister Khalid al-Falih said on Tuesday the oil industry needed a price above $50 per barrel to sustain investments but added that downward pressure would prevail because of an inventory glut.

“We need a price higher than $50 to achieve balance in oil markets in the long term,” Falih told German business daily Handelsblatt.

“But there are still excess stocks on the market – hundreds of millions of barrels of surplus oil. It will take a long time to reduce this inventory overhang,” he added.

Oil prices fell to a two-month low on Monday on renewed fears of oversupply.

On Tuesday, commodity and stock prices rose as the dollar index dropped 0.4 percent. The UK pound bounced back from a 31-year low amid easing political tensions in Britain and as hopes for stimulus measures boosted risk appetite.

A brief suspension of tanker loading in Iraq and conflicting reports of new attacks in Nigeria also bolstered prices.

On the downside, a Reuters poll showed that China’s economic growth likely cooled to a seven-year low in the second quarter as the industrial sector lost steam and a boost from financial services faded.

Hedge funds cutting their exposure to oil prices have also contributed to bearish sentiment, resulting in a 12 percent fall in Brent prices from their June peak above $52 per barrel.

“Oil prices could rally each time macro sentiment recovers on expectations of yet another round of quantitative easing, but for now the path of least resistance seems to be lower in the near term,” analyst Virendra Chauhan of Energy Aspects told the Reuters Global Oil Forum.

Energy Aspects cut its third-quarter Brent forecast to $52 from $55 a barrel.

Physical markets were weak, with Asian refiners processing less crude as they grapple with margins that plunged to five-year lows as refined products flooded the region.

(Additional reporting by Henning Gloystein in Singapore and Christopher Johnson in London; Editing by Dale Hudson)