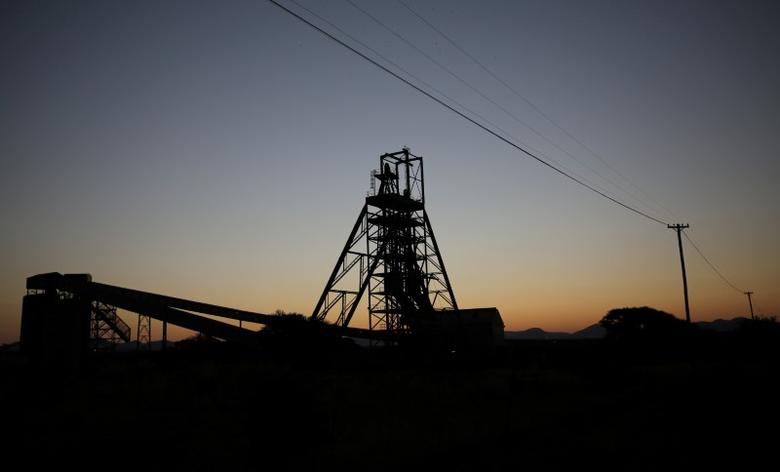 FILE PHOTO: A mine shaft is seen at the Tumela Mine, an Anglo American open pit mine, located in Thabazimbi, Limpopo Province, South Africa, June 9,2016. REUTERS/Siphiwe Sibeko/File Photo
By Vikram Subhedar and Barbara Lewis | LONDON/CAPE TOWN

Mining stocks are outpacing oil-related peers in a “reflation rally” sparked by U.S. President Donald Trump’s election and the outperformance will last for at least another year if history is a guide. Investors have flocked to sectors closely geared to the global economic cycle and the shift gained momentum in November after Trump’s victory inspired expectations for boosts to manufacturing, infrastructure spending, and global growth.

While both energy and mining stocks rose, the latter charged higher in the second half of the year led by bellwethers such as Anglo American and Glencore, in stark contrast to a dismal 2015. Since October last year, the mining sector has easily outperformed the energy stocks on monthly returns.

“Our UK PMs (portfolio managers) hold miners in preference to oil majors based on prospects for better dividend growth and earnings revisions, which are the key fundamental drivers on a two to three year horizon,” Frances Hudson, global thematic strategist at Standard Life Investments, said.

Since 1980, there have been four spells when European mining stocks made bigger gains than energy majors, such as BP and Shell and each lasted at least a year. That suggests the current outperformance that began late in 2016 has months to run.

The last mining surge was in 2010 when big gains in metals prices pushed investors towards mining stocks, while the shale revolution in the United States took off, flooding oil and gas markets and weakening the oil price.

Results from BP and Statoil on Tuesday showed the risks to stock prices from disappointing results. Both companies reported underwhelming earnings sending their shares down about 2 percent. [nL5N1FS16K][nL5N1FS0KN]

Goldman Sachs said in a note to clients that oil-related shares were coming off their strongest 12-month performance relative to the physical price of crude since at least the 1980s, leaving limited room for further gains.

For miners, the fundamentals look more bullish as supply starts to be constrained following cuts in exploration budgets linked to the commodity price downturn of 2015.

“There have been dramatic changes to fundamentals. Supply growth has basically stopped. Copper is the key,” Chris LaFemina, managing director at Jefferies, said of mining, adding there was still plenty of scope for gains even after last year’s recovery.

Basic materials stocks are easily the best performing sector this year, up more than 6 percent. The broader STOXX 600 is up 1 percent while oil and gas is one of just three sub-sectors in the red.

At a mining conference in Cape Town, the first major industry event of the year, insiders were more upbeat compared with last year but mindful of risks given the sector’s history of boom and bust.

Tom Albanese, chief executive of diversified miner Vedanta, said that while the mining sector had recovered prices remained modest compared with where they were before the 2015 crash.

“I would not say these are peak prices. I see a progression of supply-tightening events,” Albanese said.