Natural gas is elbowing coal aside when it comes to cooling the U.S. Combined with weather worries, that could allow the commodity to build on gains that propelled it to its highest close in more than seven months.

Weekly increases in domestic natural-gas supplies have been lower than normal “so the surplus is being worked down,” said James Williams, energy economist at WTRG Economics.
Much of that has to do with waning demand for coal. 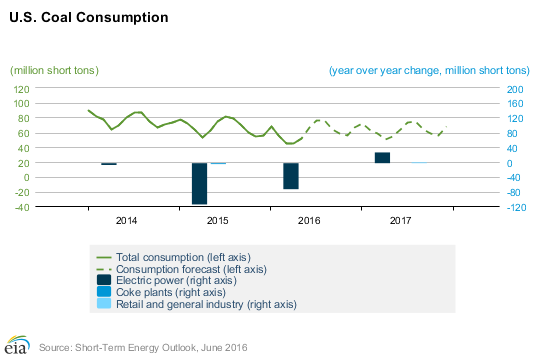 “The primary use of gas in the summer is for power generation for air conditioning,” said Williams. “This is higher than normal because the lower price makes it economic to substitute for coal.”

In other words, despite the recent run-up, natural gas is still relatively cheap. Natural-gas futures trade nearly 60% below 2014’s peak above $6 per million Btus.

Meanwhile, coal consumption in the electric power sector, which accounts for over 90% of its demand, is forecast to decline by 10% this year in part because of competition with low-price natural gas, according to the EIA.

“Coal generation was only 72.3 million megawatt hours—strongly pointing to the end of coal as we knew it for many decades,” he said in a recent note.

The weather, of course, has the power to change everything—at least when it comes to natural gas.

June 1 marked the official start of the Atlantic hurricane season. Storms in the Atlantic can impact natural-gas production in the Gulf of Mexico, though the impact of storms in the region have diminished in recent years following the rise of U.S. shale production.

“This summer, that could cause big problems, especially if we have a hot summer or if this active tropical storm season reduces production at a time when natural-gas consumption is soaring to a record high,” said Phil Flynn, senior market analyst at Price Futures Group.

Earlier this week, Tropical Storm Colin in the Atlantic didn’t threaten energy output and rig activity in the Gulf, but served as a reminder of weather-related risks.

The storm activity early on in the hurricane season “may mean we are in for a long summer of activity as the breakdown of El Niño, and the settling in of La Niña, may cause a hotter than normal summer and more tropical storm activity—both of which means upward price spikes in natural gas and oil are possible,” said Flynn.

The number of active U.S. natural-gas rigs was down by 5 to 82, according to the latest data from Baker Hughes BHI, +0.12% That’s “near an all- time low,” according to Flynn.

And “natural-gas production could soon start to fall dramatically as some natural-gas rigs get reclassified as oil rigs because oil is fetching a better price,” he said in a recent note.

Oil futures CLN6, +1.57%  have climbed more than 30% so far this year. Natural-gas futures, meanwhile, have gained just over 6% year to date.

The price of natural gas is “not high enough to justify increased drilling for gas, so the final determinant is weather,” said WTRG’s Williams.

Prices for the commodity are likely to average $2.22 per million British thermal units this year, but climb to an average of $2.96 next year, the EIA said.