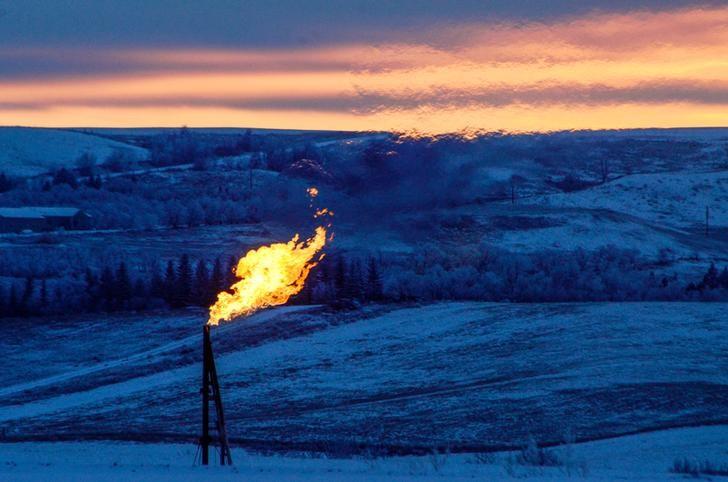 Hedge funds have built their largest bullish position in U.S. natural gas for more than two years amid signs the gas glut is being eroded quickly and the market could tighten in 2017.

Hedge funds and other money managers have amassed a net long position in the two main futures and options contracts on NYMEX and ICE equivalent to 2,293 billion cubic feet of gas (tmsnrt.rs/2cBLUlL).

The net long position has almost quadrupled over the last four weeks, and is now at the highest level since June 2014, according to an analysis of data released on Friday by the U.S. Commodity Futures Trading Commission.

Positioning has been shifting steadily from bearish to bullish since November 2015 but the pace of adjustment has accelerated sharply.

The most recent weekly increase in the net long position was the third-largest since the start of 2010 (tmsnrt.rs/2cXCfsd).

The majority of the adjustment has come from the short side of the market, where hedge funds with bearish short positions betting a fall in gas prices have scaled them back.

Hedge funds are reacting to signs the gas market is rapidly rebalancing from oversupply in 2015 towards a potential deficit in 2017 (“U.S. natural gas market rebalancing well underway”, Reuters, Sep 16).

Low gas prices have gradually eroded the excess supply by causing production growth to stall and go into reverse while encouraging record consumption by power producers.

Rebalancing has been accelerated by unusually hot weather across the most populous parts of the United States this summer.

Temperatures and airconditioning demand have been far above normal almost continuously since the end of May (“U.S. natural gas market rebalances on hot weather, low prices”, Reuters, Aug 19).

Winter 2016/17 is likely to be colder than the record warm winter of 2015/16 which should increase gas consumption.

Most of the new gas-fired generating capacity will be combined cycle power plants designed for baseloading rather than steam turbines or combustion turbines operating at peak times.

The implied increase in gas consumption will tighten the market even further unless gas prices rise to stimulate more drilling and stimulate some shift from gas combustion back to coal in 2017.

Hedge funds have already anticipated and likely accelerated the price rise by accumulating a large long position in futures and options.

The calendar average futures price for gas delivered in 2017 has risen to $3.14 per million British thermal units from a low of $2.14 back in December 2015.

The fundamental outlook for prices looks fairly strong at present, but the emergence of a large hedge-fund long position has increased the risk of a price reversal if position holders try to take some profits.

The net long position amassed by hedge funds over recent weeks is large by the standard of the last five years, though below the peaks reported in 2013/14.

So, while fundamentals should continue to support higher gas prices into 2017, liquidation risk has increased substantially and is a negative factor for prices in the short to medium term.

(John Kemp is a Reuters market analyst. The views expressed are his own.)