Coal: after the $100 per tonne boom, how long until the bust? 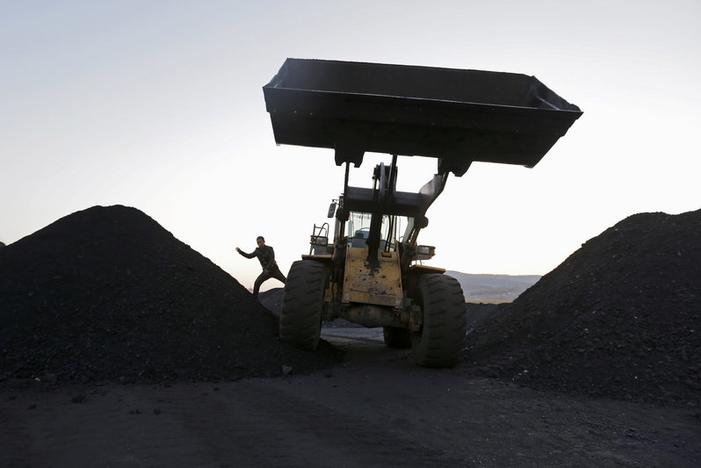 A driver gets off a loading vehicle at local businessman Sun Meng’s small coal depot near a coal mine of the state-owned Longmay Group on the outskirts of Jixi, in Heilongjiang province, China, October 23, 2015. REUTERS/Jason Lee/File Photo
By Henning Gloystein and Keith Wallis | SINGAPORE

As Australian thermal coal prices hit $100 per tonne on Tuesday for the first time since 2012, the fuel’s rally is now among the commodity’s top-three bull-runs on record.

The bull-run rivals the 2011 Fukushima nuclear meltown and Australian mining flood spike, and the 2008/09 financial boom and bust.

With Australian Newcastle spot cargo prices for November, up almost 100 percent since June to $100 per tonne, their highest since 2012, traders and analysts say a bust is inevitable.

“Of course it’s not going to last. Rising prices are encouraging Chinese miners to raise output and the government, seeing how much prices have risen, has backed down somewhat and asked for an increase in production,” said Ralph Leszczynski of shipping brokerage Banchero Costa.

However, many believe prices could keep rising until the end of the year or possibly into early 2017 as the winter season fuels demand and miners take time to bring on more production.

The price rally for thermal coal, used to generate electricity, was triggered by a Chinese government decision to cap its mining output, aimed at reining in rampant overcapacity, and which forced its utilities to import more coal.

He does not expect current prices to last “too much longer” as Chinese authorities urge miners to raise output again to control spiraling coal prices.

International exporters are also reacting to higher prices, with Glencore last week announcing it will hire more than 200 workers at its Collinsville coal mine in Australia, which mostly exports thermal coal.

Australia’s Department of Industry and Science expects thermal coal exports from Australia to rise by three million tonnes to 203 million tonnes in fiscal 2017.

Vertical price jumps tend to be followed by sharp downward corrections, yet many analysts believe the coming downturn will be more gradual than the rally that preceded it.

“Increasing production comes with a lag as you need to re-hire workers, do training etc,” said Leszczynski.

China and other big importers like South Korea are also short of supplies ahead of winter, which many forecasters expect to be colder than the last two.

Traders also pointed to big price rises for metallurgical coal, which has been hit by outages in Australia. This has also affected thermal coal since both coals tend to come from the same mines.

“There’s a perfect storm in coal markets. Metallurgical coal is red hot, due to outages in Australia and – like in thermal coal – because of soaring Chinese imports,” said a mining investment advisor in Singapore, who spoke anonymously due to the price sensitivity of the matter to his clients.

A somewhat gradual price retreat is mirrored in the forward curve, where Chinese coal futures show a price fall from $85.30 per tonne for November to $71 by April next year, and to $61.15 a tonne in October 2017.

Forward contracts show how much traders are willing to pay today for a product to be delivered at a later stage.

Utilities using coal to generate electricity are already preparing accordingly: a source at a South Korean utility said prices could rise further before tapering off into 2017.

He was therefore trying to avoid the spot market and instead “seeking to buy cargoes for next year’s third and fourth quarters.”

Newcastle coal cargo prices for the third quarter of 2017 are currently priced around $73.25 per tonne, $22.75 below current spot cargo prices.