High demand for gas to soak up some crude’s supply glut: analyst

Drivers are expected to pay the lowest Memorial Day weekend prices for gasoline since 2005 thanks to the plunge in crude-oil prices over the past two years. 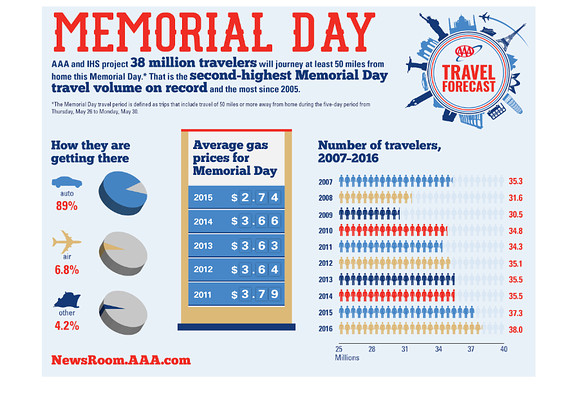 “As an army of motorists descend onto the nation’s thoroughfares for the coming holiday, gasoline prices are the lowest they’ve been this time of year since 2005,” said Patrick DeHaan, senior petroleum analyst at GasBuddy.com, a retail fuel-pricing information and data provider.

More than 38 million Americans—the most since 2005—are expected to travel during this year’s Memorial Day holiday period, defined as Thursday, May 26 to Monday, May 30, according to report released Thursday from AAA, a leisure travel and motorist group, and IHS, an information and analysis provider.
Of that figure, 33.9 million travelers, or 89%, will drive to their destinations, up 2.1% from a year earlier.

‘Americans might save $15 billion on gas during the summer driving season compared to a year ago.’

“Americans might save $15 billion on gas during the summer driving season compared to a year ago,” AAA said in a news release issued.

The national average price for a gallon of gasoline stood at $2.26 on Thursday, according to AAA’s Daily Fuel Gauge Report.

Gasoline demand is likely to “break all-time record highs set in 2007 due to the combination of relatively low prices and a healthy economy, a situation we haven’t seen in just as long,” DeHaan said.

But he believes that travelers should take advantage of the low prices for gasoline now, because they might not last.

This could “be the cheapest year not only [in] the last decade but in the next few years as high demand partially soaks up the glut of crude oil and oil production in the U.S. continues to decline from the 8% drop we’ve seen versus last summer,” he said.

“My advice: don’t delay—hit the road today (or tomorrow, or any time this summer),” said DeHaan.