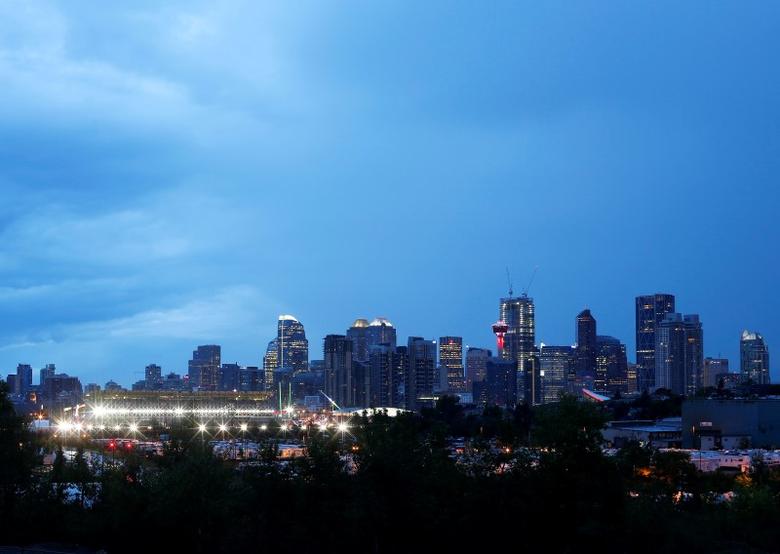 Calgary, the home of oil and gas in Canada and host to the Calgary Stampede rodeo, is pictured at dusk in Alberta, Canada July 13, 2016.REUTERS/Todd Korol
By Ethan Lou | TORONTO

Canada may ask oil companies to contribute to the hundreds of millions of dollars or more the country has to pay to an international body if they drill far offshore, according to an internal government memo.

If that happens, it could make the operations more expensive and strain talks that companies will have with provincial governments, which already require them to pay royalties.

A United Nations convention, which Canada ratified in 2003, says signatories need to pay the International Seabed Authority (ISA) if companies drill on the “extended continental shelf,” the seabed part of a country’s landmass, but more than 200 nautical miles (230 miles) offshore.

It was never clear from where that money should come. The ISA said only that Canada, where Norway’s Statoil ASA (STL.OL) has done such far-offshore explorations, is close to a position that warrants payments under the United Nations Convention on the Law of the Sea.

In the Feb. 19 memo obtained by Reuters under the access-to-information laws, an official from Global Affairs Canada, the country’s foreign department, said the agency was reviewing how to fund the payments.

Statoil’s proposed Bay du Nord project 270 nautical miles off the eastern province of Newfoundland and Labrador, in its northern region, will likely be the first to trigger such payment obligations, then-Deputy Minister Daniel Jean wrote to Foreign Minister Stephane Dion in the memo.

While Statoil holds exploration licenses for Bay du Nord and the surrounding Flemish Pass basin, it is not clear when it might reach a production agreement with Newfoundland. Talks stalled last year as the province instituted a new royalty program.

Payments are not due until five years after production, but the issue represents a looming quagmire.

The federal government is responsible for making the payments, but receives no money from the oil activity, with the province taking all royalties, the memo says. It does not estimate projected fees, but they would likely be hundreds of millions of dollars.

Statoil said in June that Bay du Nord has at least 300 million barrels of oil, worth more than $14 billion at current prices. Fees would be up to 7 percent of the annual production value.

“Whether and by how much the operators will be implicated in the sourcing for monies for Canada’s … (payment) obligations is a key part of the analysis,” read the memo.

Global Affairs spokesman John Babcock said the agency has not yet determined who would pay the fees, noting that such payments won’t be required “for many years to come.”

Statoil spokesman Alex Collins said the company has no position on the issue while the government studies it.