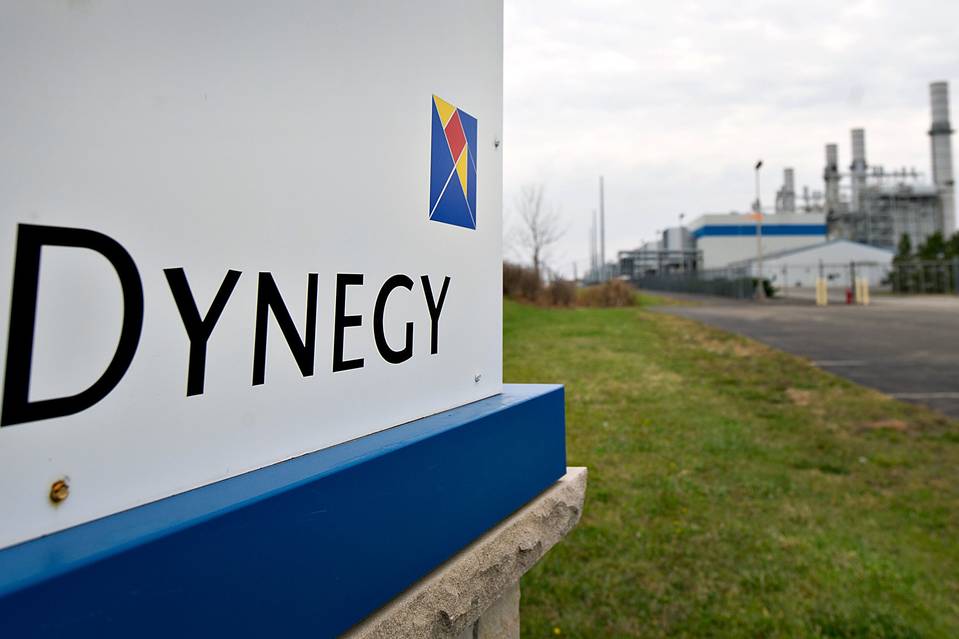 Dynegy Inc. has a colorful history that includes a merger flirtation with Enron Corp. on the eve of the energy trader’s bankruptcy and its own chapter 11 case five years ago. PHOTO: DANIEL ACKER/BLOOMBERG NEWS
By
MATT JARZEMSKY and
Dana Mattioli

Vistra Energy Corp. has made a takeover approach to debt-laden rival Dynegy Inc., according to people familiar with the matter, a tie-up that would create one of the country’s largest independent power producers.

The Texas power companies are in preliminary talks, some of the people said. It is far from guaranteed the talks will lead to a deal, but if they do, it would be sizable: Each company has a so-called enterprise value, including debt, of about $10 billion, according to S&P Capital IQ.

Dynegy has a colorful history that includes a merger flirtation with Enron Corp. on the eve of the energy trader’s bankruptcy and its own chapter 11 case five years ago. Dynegy is a wholesale power producer with 50 plants in 12 states around the country, producing enough energy for some 25 million homes. Customers include utilities and municipalities as well as financial players like banks and hedge funds. The Houston company also has a retail business that provides electricity to about 963,000 residential customers in Illinois, Ohio and Pennsylvania, according to its annual report.

Dallas-based Vistra operates Luminant, which produces and sells power on the open market, and retail-electricity provider TXU Energy Inc., which serves about 1.7 million residential and business customers in Texas. Tacking on Dynegy’s power stations would broaden Vistra’s footprint to the Midwest, Northeast and other parts of the country.

Vistra also has a colorful past. Investors including private-equity firms KKR & Co. and TPG took a predecessor, TXU Corp., private for $32 billion at the height of the leveraged-buyout boom that preceded the financial crisis. The deal was the largest LBO in history and a hallmark of buyout firms’ big-ticket purchases in those years.

TXU, now called Energy Future Holdings Corp., filed for chapter 11 protection in 2014 with $42 billion in debt after a decline in power prices upended its business. The operations that now form Vistra were spun out of Energy Future in October, a key milestone in one of the largest corporate bankruptcies in history. Energy Future’s utility arm, which owns a majority stake in Texas’ Oncor, remains in bankruptcy.

Some of Vistra’s owners see a tie-up as a way to increase investor awareness and trading volume in the stock, which could make it easier for them to sell equity they received in the restructuring, according to people familiar with the matter. The company’s largest shareholders include former Energy Future lenders Brookfield Asset Management Inc., Oaktree Capital Group LLC and Apollo Global Management LLC.

As is often the case for companies fresh out of bankruptcy, Vistra’s shares trade less than those of its peers. Some 870,000 shares changed hands, on average, the past 30 days, about a quarter of Dynegy’s trading volume, according to FactSet.

But buying Dynegy would mean absorbing its hefty debt load of about $9 billion, which has become a burden as the company has lost money in recent quarters amid low wholesale power prices. Following a 60% decline in its shares in the past year, Dynegy had a market value of just over $900 million at Thursday’s close.

The slump in electricity prices is helping fuel deal talks among power producers. Calpine Corp., another big wholesale power generator that is worth more than $16 billion including debt, is weighing a sale and has attracted interest from private-equity firms, The Wall Street Journal reported last week.

Dynegy started as Natural Gas Clearinghouse, a brokerage formed in Houston in the mid-1980s to trade natural gas and electricity. Over the years, it acquired and developed dozens of power plants in the U.S. and elsewhere, tracing the rise of independent power producers in an era of deregulation of electricity markets.

Dynegy itself soon ran into financial trouble, as investors fled energy-company stocks in the wake of Enron’s accounting scandal. It recovered by selling assets and cutting costs. But the company filed for chapter 11 in 2012, hurt by sharp declines in power prices and a heavy debt load. The bankruptcy filing followed a takeover bid by private-equity firm Blackstone Group LP that fizzled amid opposition from Carl Icahn and other Dynegy shareholders. The company emerged from bankruptcy later in 2012 and has since done a number of debt-fueled acquisitions.

Corrections & Amplifications
A bankruptcy unit of Energy Future Holdings Corp. own a majority stake in Texas’s Oncor. Oncor itself is not in bankruptcy, as an earlier version of this article incorrectly stated. (May 19, 2017)