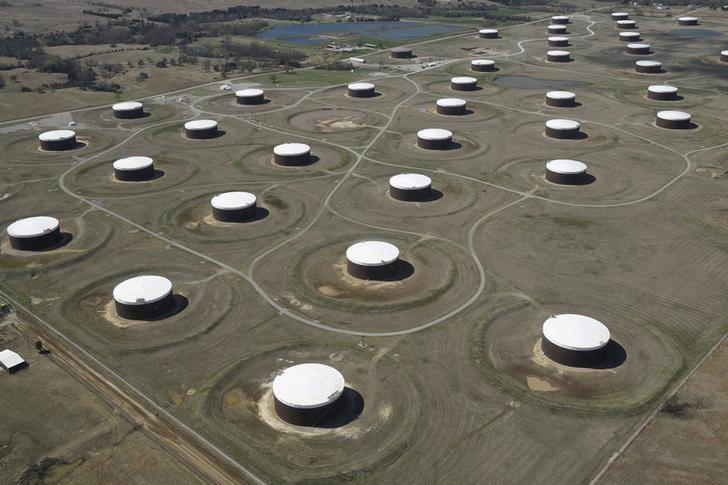 The number of rigs drilling for oil and gas in the United States has recorded the largest one-week increase for over five years, confirming a rapid upturn is now underway.

The number of active oil and gas rigs jumped by 35 to 694 last week, according to oilfield services company Baker Hughes (tmsnrt.rs/2jSM39f).

Some of the increase may have been due to catch-up effects since the rig count unexpectedly declined by six the previous week. The average across the two weeks was in line with the recent trend.

But there is no denying a rapid and sustained upturn is now underway which could pose challenges for the Organization of the Petroleum Exporting Countries and for shale drillers themselves.

The total number of rigs drilling for oil and gas has risen by 290, or more than 70 percent, from its cyclical low point at the end of May 2016 (tmsnrt.rs/2jSHfk0).

The number of rigs targeting oil-bearing formations has rise by 235, or nearly 75 percent, from the cycle low at end-May.

Rigs targeting primarily gas-bearing formations have also rebounded by 61, or 75 percent, from a own low in late August.

The production increase is likely to be even greater than the raw rig count suggests because drillers have become increasingly efficient.

Rigs are boring faster than before and drilling longer horizontal sections to recover more oil and gas from each well.

But the increase in output threatens to snuff out the rise in oil and gas prices which caused the drilling rebound in the first place.

U.S. shale producers will be adding extra barrels at the same time when OPEC and non-OPEC countries are reducing their own output in an attempt to drain excess inventories.

The threat from shale is one reason senior OPEC and non-OPEC policymakers want to keep their options open about whether the extend the current six-month production cutting deal.

Like the biblical story of Lazarus, who was raised from the dead, OPEC and non-OPEC oil exporters have helped bring the moribund U.S. shale sector back to life.

The U.S. shale sector showed tentative signs of recovering even before OPEC announced its production deal thanks to a big improvement in efficiency and cost reduction efforts.

But the surge in oil prices as a result of the OPEC and non-OPEC production cuts has given shale drillers more confidence and more cash flow.

U.S. domestic gas prices have also been rising fairly consistently since the first quarter of 2016 which has encouraged producers to add more rigs.

In pushing for OPEC and non-OPEC production cuts, Saudi Arabia gambled that the cuts could drain excess inventories before shale production ramps up and starts adding extra barrels to the global supply picture.

Saudi policymakers have also gambled a limited rise in prices will only cause a limited resurgence in shale output and this can be absorbed by the market thanks to demand growth.

If U.S. shale production shows signs of growing too rapidly, the current OPEC and non-OPEC deals are unlikely to be extended.

Saudi Arabia and other major oil exporters will likely revert to a strategy of defending market share by increasing their own production.

In the U.S. gas market, too, the sustained increase in drilling will stem the decline in production and arrest the rapid drawdown in gas stocks evident in 2016.

And the big increase in oil drilling will also add to the supply of gas since most oil wells will also produce some associated or casinghead gas.

The number of active rigs seems set to increase even further in the next few months as shale producers shift from a focus on conserving cash to growing output.

Shale producers are planning a big increase in their drilling budgets for 2017, according to an analysis of capital plans published by the Wall Street Journal (“U.S. oil producers ramp up spending”, WSJ, Jan. 20).

But therein lies the risk for U.S. shale producers because if oil and gas output rises too fast it will send prices tumbling lower again.

The shale industry’s shorter development cycles should enable it to add and reduce output more quickly than conventional fields.

Shale oil and gas producers have promised to maintain a more disciplined approach to production and focus on increasing profits rather than growing volumes.

But there will still be lags between prices, drilling and production, which will ensure lots of short-term price cycling (“Volatility and its various meanings in the oil market”, Reuters, Jan. 18).