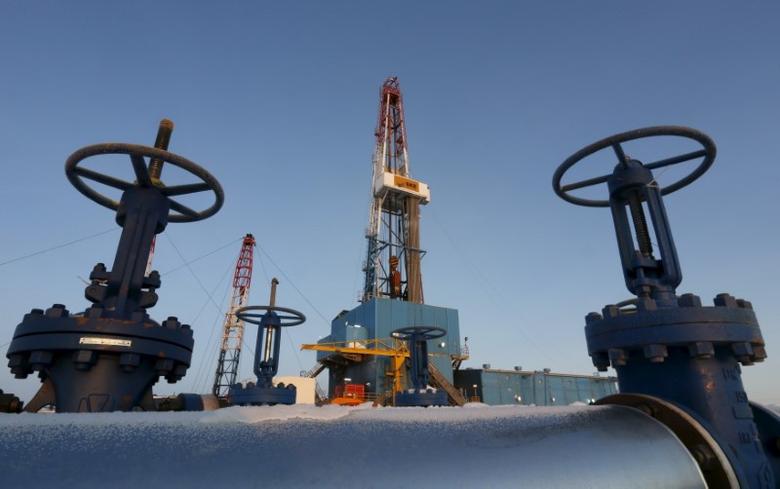 An oil pipe is seen in front of a drilling rig at a Lukoil-owned oil field outside the West Siberian city of Kogalym, Russia, January 25, 2016. To match story RUSSIA-OIL/TAXES REUTERS/Sergei Karpukhin
By Jessica Resnick-Ault | NEW YORK

Oil prices fell on Friday after a three-day rally ran out of steam as a higher U.S. rig count signaled rising production from shale, contributing to the global supply glut.

Prices have been locked within a range during the first quarter as traders searched for signals that the Organization of the Petroleum Exporting Countries’ production cuts are effective or that U.S. production is continuing to offset efforts to rebalance the market.

Brent futures settled down 13 cents at $52.83 a barrel. The contracts have lost around 7 percent since the previous quarter, the largest quarterly losses since late 2015.

U.S. crude futures CLc1 settled up slightly, rising 25 cents to $50.60 a barrel after slipping below $50. They ended the quarter at about 5.7 percent lower, also the worst quarterly loss since late 2015.

Oil prices had gained momentum this week on a growing sense that OPEC and nonmember Russia would extend their production cut, seeking to drive the market higher.

“There’s resistance at $52 to $53 a barrel,” said Tony Headrick, energy market analyst CHS Hedging. Additionally, the WTI-Brent spread, which widened early in the month, narrowed to the tightest since March 3, after exports picked up last week, he said.

The U.S. energy department on Friday released supply and demand figures for January, the latest month available, saying the country’s oil demand for that month was up 0.9 percent at 19.234 million barrels per day, while production rose 60,000 bpd to 8.835 million barrels. [EIA/PSM]

The indicator has shown huge gains, with the rig count doubling in a 10-month recovery and undermining efforts led by OPEC to rein in output.

“I wouldn’t be surprised to see some profit-taking ahead of the weekend after the strong gains in recent days,” said Carsten Fritsch, commodity analyst at Commerzbank.

OPEC and non-OPEC producers including Russia agreed late last year to cut output by almost 1.8 million barrels per day in the first half of 2017 to ease a global supply overhang and prop up prices.

Nevertheless, analysts polled on a monthly basis by Reuters have slightly lowered their oil price expectations for this year.

(Additional reporting by Henning Gloystein in Singapore and Karolin Schaps in London; Editing by Richard Chang and Matthew Lewis)