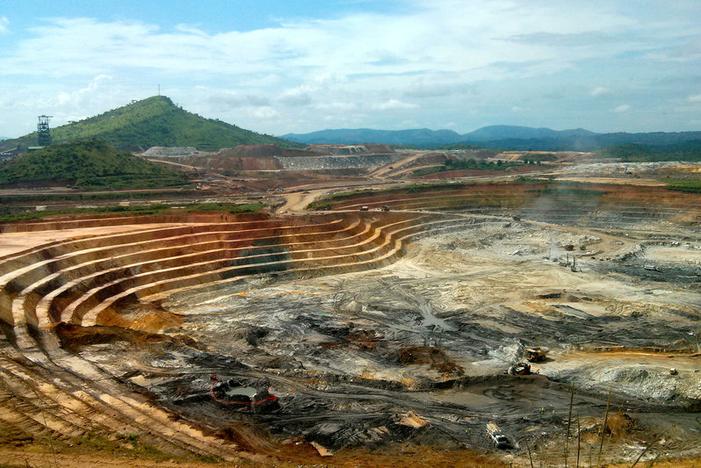 The KCD open pit gold mine, operated by Randgold, at the Kibali mining site in the Democratic Republic of Congo, May 1, 2014.REUTERS/Pete Jones/File Photo
By Zandi Shabalala | LONDON

A surge in gold has inspired some of the world’s largest bullion producers to increase dividends to attract yield-starved investors though some warn higher payouts may be too hasty in light of past mistakes.

The industry has faced criticism that it squandered the spoils from gold prices above $1,900 an ounce in 2011 on dividends and acquisitions, rather than cutting costs and investing in existing mines.

When the gold price fell some companies were forced to shelve expensive projects and sell mines to stay afloat while battling a mountain of debt taken on to fund a buying spree.

So far this year though, gold has climbed nearly 20 percent to $1,225 after three years of declines, spurred by doubts about the pace of U.S. interest rate increases and global political uncertainty.

But as dividends also climb once again, some investors and gold mining executives say companies are making the same mistakes as before by spending rather than investing to weather the next downturn.

“We all got a wake-up call in December (when gold fell sharply), we all vowed to be different in our behavior and focus on real, disciplined business practices.”

Africa-focused Randgold, which prides itself on being a low-cost producer that is careful with its cash, is planning to raise its dividend at the end of the year as it should have some $500 million in cash on its balance sheet, though it will be investing in three new projects too.

George Cheveley, who manages Investec’s $83 million Global Gold Strategy fund, said he preferred companies that paid steady dividends throughout gold price swings rather than going on a splurge when times were good.

“We like to see companies who have the discipline to produce free cash flow, to be consistent in paying dividends. Too often companies invested too much at the peak of the cycle,” he said.

Dividend yields at gold mining firms have been rising steadily this year as cash-flushed companies recover from last year’s gold price lows, and some investors expect more to come.

“Over the next couple of years I hope to see them get their yields up to something that is competitive with the broader dividend-paying stocks that are out there,” said Joseph Foster, portfolio manager at Van Eck Associates of New York.

Newmont Mining Corp, the world’s second-biggest gold miner, doubled its quarterly dividend in October and introduced a new payout policy which has the potential to more than double dividends from the first quarter of 2017.

Australia’s Newcrest Mining, the world’s fourth largest gold miner by value, reinstated its dividend this year for the first time since 2013 while Canada’s Agnico Eagle raised its quarterly dividend by 25 percent in July to the highest in three years.

Some analysts are cautiously optimistic about the rise in dividend payouts, saying they have not reached excessive levels.

“There is always a danger of making the same mistakes but I don’t think yields are above and beyond what they should be,” Cantor Fitzgerald director of equity research Asa Bridle said.

The world’s largest gold producer, Barrick Gold, said it would consider a dividend increase but cutting debt remained a priority.

AngloGold Ashanti, which has not paid dividends since 2013, said it would provide an update on its policy early next year.

“There is an element of competition among different sectors to attract investor interest. With mining companies, the risk is high but so is the reward,” Cantor Fitzgerald’s Bridle said.