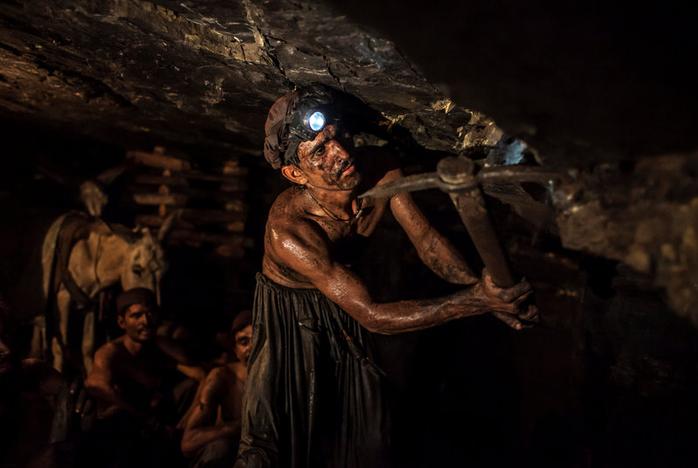 Miner Mohammad Ismail, 25, digs in a coal mine in Choa Saidan Shah, Punjab province, April 29, 2014. REUTERS/Sara Farid/File Photo
By Henning Gloystein and Barbara Lewis | SINGAPORE/LONDON
An unprecedented surge in coal prices in the past few months to more than double their June levels is a big fillip for Glencore and Noble, who are among the biggest traders of thermal coal, which is used to produce electricity.

They are taking advantage of their mine production, storage facilities and shipping fleets to provide users of coal with cargoes at short notice and at premium prices, sources familiar with recent deals told Reuters. They are also striking longer-term supply deals, also on rich terms, the sources said.

The turnaround in their prospects in the coal market is remarkable for two companies who have reported poor financial results in the past 12 months partly because of an earlier collapse in coal prices, and whose shares had fallen to record lows. In particular, Noble has struggled with credit downgrades, questions about its accounting practices, and a management shakeup.

For Glencore, the boost would have been greater but for an ill-timed decision last year to sell 55 million tonnes of coal forward – representing about half of its 2016 and 2017 production capacity – at $53 a tonne, against current prices almost double that level. In August it said the lost profit opportunity from that decision was almost $400 million and Glencore sources said this has likely increased since, though they noted that the impact was fading as the hedge is gradually worked through.

The firm made the forward sales because at the time it was urgently seeking to reduce debt and conserve cash, a source at Glencore said. The coal is still being sold at a profit given the firm has a very low production cost base of about $37 a tonne, this person said.

Coal prices were trading at around $140 a tonne back in March 2011 before the collapse in prices.

Glencore and Noble declined to comment for this article.

The rise in coal prices has been so sharp and sudden, the steepest on record, that it has been branded by Goldman Sachs and Citi as the year’s hot commodity. The gains were largely the result of an unexpected move by China, which is the world’s biggest consumer of coal, to slash its coal production.

Trading houses were in a perfect position, given their command of the coal and transport markets, to maximize their opportunities, said Patrick Markey, managing director of commodity advisory Sierra Vista Resources in Singapore.

Glencore’s Head of Coal Marketing Tor Peterson, who has almost legendary status for deal making in the opaque coal market, has been at the forefront of some of the firm’s recent deals, several sources said.

The firm locked in a Russian spot market coal deal at $99 per tonne with Korea Southern Power (KOSPO) in mid-October, according to several sources familiar with the matter. That was $7.25 higher than the Pacific benchmark Newcastle coal price, and at a level not seen since 2012. The coal would have been worth just $50 a tonne in June.

One source with knowledge of the matter said similar deals, to other countries in Asia, had since been made at $103 per tonne.

“These recent deals have Tor’s writing all over them. They were swiftly implemented, at a good price for the seller,” a senior coal trader at one of Glencore’s main competitors said.

Peterson, an American in his early 50s who has worked for Glencore since 1992, gained his reputation for savvy trading by taking advantage of sudden changes in market conditions to make a profit through quick sourcing of supplies that he then offers for sale, often before competitors can react. It is unclear whether he signed off on the decision to sell so much of the production forward.

In the longer-term market, Glencore and Japanese power utility Japan’s Tohoku Electric this week settled quarterly thermal coal contract prices at $94.75 a tonne, up from around $64 last quarter. That was for more than 2 million tonnes, meaning its value is more than $60 million higher than three months earlier.

Despite the forward sales, British investment bank Liberum says it thinks Glencore will be a winner from the coal rally as utilities in South Korea, China and Japan stock up for the colder months.

“Glencore is the greatest beneficiary” of the soaring coal prices “and remains our most preferred of the (mining) majors,” it said in a note this month. Glencore’s share price has risen more than three-fold to be at 242 pence ($2.94) on Friday from a record low of 69 pence in January. NEW SUPPLY CONTRACTS

If Glencore has good reason to be a keen rider of the coal bull-run, so does Noble Group, Asia’s biggest commodity trading house.

For 2015, it reported its first annual loss in almost 20 years, much of this blamed on the coal price slump, triggering credit downgrades and pulling its market capitalization below 1.5 billion Singapore dollars ($1.08 billion) by September.

Traditionally light on mining assets, Noble in March announced it had set up an Australian coal supply joint venture with Japan’s Shikoku Electric, adding to other so-called participations – or offtake agreements – in Indonesia, South Africa and Australia.

Sources at the company said this gave Noble, whose co-CEO is now its former coal business head William Randall, more options to deliver coal profitably, globally, and at short notice.

The firm’s shares have recovered some of their losses to be trading at 16.8 Singapore cents at the close of trading on Friday, up from a low of 11.2 cents in early September. While the traders may be winners, the consumers are clearly losers as the coal price climbs.

South Korean utilities are being stung by the high prices and finding it difficult to generate electricity profitably.

“As fuel prices are rising, we won’t get good returns,” said a Korean utility source, who declined to be named due to company policy. The big question is whether the price rises are sustainable.

Analysts predict continued strength through the peak-demand winter months, but the outlook into 2017 is less certain.

For the longer term, high prices are likely to accelerate a push by governments and environmentalists for lower carbon, less polluting energy. Much depends on China, the world’s biggest coal producer and consumer, where authorities have criticized the rally as unsustainable and told miners to increase output again, albeit not to full capacity.

(Additional reporting by Jim Regan in SYDNEY, Jane Chung in SEOUL, and Fergus Jensen in JAKARTA; Editing by Martin Howell)