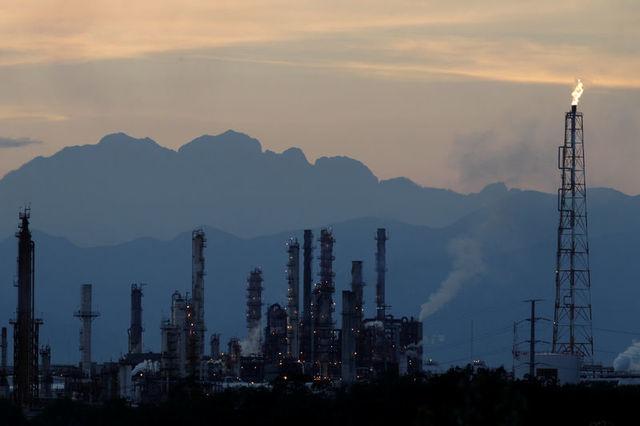 U.S. Gulf Coast refiners are cashing in on rising fuel demand from Mexico, shipping record volumes to a southern neighbor that has failed to expand its refining network to supply a fast-growing economy.

The fuel trade could top a million barrels per day (bpd) at times in 2017 as Mexico becomes increasingly dependent on the United States for strategic energy supplies and providing business worth more than $15 billion a year to refiners such as Valero (VLO.N), Marathon Petroleum (MPC.N) and Citgo Petroleum.

The rise in Mexico’s fuel imports reflects an economy that, after expanding for 27 quarters in a row even amid a public austerity plan, has been unable to increase its refining output to satisfy the consistent growth of its energy demand.

It has led to rapid reversal in energy trade between the two countries. In 2016, crude exporter Mexico will be a net oil importer from the United States for the first time as shipments of refined fuel heading south outnumber shipments of crude to the north, according to the U.S. Energy Information Administration (EIA).

Profit margins for the exports are strong for U.S. Gulf Coast refiners, said a source at a refiner involved in the trade.

“You’re getting very good values if you’re a Gulf coast supplier,” he said. “Freight has been dirt cheap too – so it doesn’t cost that much to move the barrels either.”

Mexico constitutes a bright spot in what has otherwise been a dark year the U.S. refining industry with profits at a five-year low in 2016.

The exports also help to ease a supply glut in the U.S. market, said Barclays equity analyst Paul Cheng. That boosts profit margins industry-wide, even for refiners that are not directly involved in the trade, he added.

Other than state-run Pemex, among the top exporters of U.S. gasoline and distillates to Mexico to date in 2016 are Citgo Petroleum, Exxon Mobil (XOM.N) and Marathon, according to partial data based on shipping data from Thomson Reuters. A full breakdown combining marine, road, rail and pipeline exports by company is not publicly available.

Based on the price for benchmark U.S. gasoline RBc1 trading at over $65 a barrel, that volume of Citgo’s exports are worth around $1.4 billion and Marathon’s around $1 billion.

Despite the rising volume of exports to Mexico, publicly traded U.S. Gulf refiners are valued below their peers. Marathon is trading at 14.67 times its expected earnings, while Valero is at 12.51. That compared to an industry median of 16.10 in oil and gas refining.

Valero did not respond to requests for comment on this story. Marathon said they would not go into detail about its exports, and Exxon Mobil also declined to comment.

The shortfall between demand and supply in Mexico has been exacerbated by the government slashing the budget for oil giant Petroleos Mexicanos (Pemex).

Pemex faces a further cut of around $5.36 billion in 2017, which hurts its ability to improve refinery output. Refineries in Mexico are running at about 60 percent of their 1.576 million bpd of capacity, according to the company’s data. That leaves the onus on Pemex to import more to cover demand.

For decades, imports were a burden on state coffers, as Mexico made a loss on fuel sales at the pump while they were heavily subsidized rate.

Mexico’s fuel demand is around 2.04 million bpd and the government expects growth of 2-3 percent per year in coming years.

The country is the world’s fourth-largest consumer of gasoline. Car sales through September increased 18 percent on the year, to a record of 1.12 million units, pointing to continued strong demand growth.

“We continue to see very good demand for gasoline into Mexico and South America… we see good growth in that region,” Gary Simmons, a senior executive at Valero, said on a conference call.

In September, Mexico’s imports of U.S. fuel surged to a monthly record of about 960,000 bpd, according to the EIA. The average for the year-to-date is around 820,000 bpd.

Most of the exports are seaborne, but rail firms have also benefited with a sharp rise in volumes shipped over the border on trains, according to the Association of American Railroads.

Mexico’s government opened the industry to private capital in 2013 to reverse a protracted slide in oil output, refining and reserves. Pemex still buys most of the imports from the U.S. Gulf refiners, but private imports are expected to grow in 2017 with further liberalization and improved cross-border infrastructure.

“We are expecting Mexico’s imports from the U.S. to increase to an average of 900,000 barrels per day (bpd) in 2017… imports would surpass 1 million bpd at times in 2017 if private imports become significant after price liberalization,” said Robert Campbell, head of oil products research at Energy Aspects.

President-elect Donald Trump’s plans to rewrite the terms of trade between the two countries have made importers and exporters nervous that a deterioration in bilateral relations or changes in taxes and tariffs could disrupt the flow.

“Even a minimum change in taxes could mess up gasoline exports to Mexico,” a source working at a terminal and pipeline operator doing business with Pemex said. “Everybody is worried, but nobody says it.”

More difficult trade could force Mexico to look for other supply sources such as Europe, but it is difficult for European refiners to export fuel at a price competitive with their rivals in the United States due to shipping costs.

Some of the top-ranking members of Trump’s cabinet are from the energy industry, adding even more clout to one of the most powerful lobbies in Washington which will push hard to prevent Trump doing anything that would hurt the trade.

“Whatever restrictions might be placed on trade and immigrant flows between Mexico and the U.S. during the Trump Administration, U.S. energy producers will be anxious to protect growing hydrocarbon exports to our southern neighbor,” said Fielden.